Hailed as a “Rising Star in the Guitar World” (Corvallis Arts Review), Jaxon Williams is an acclaimed classical guitarist and pedagogue.

He is also a former Fulbright scholar, having studied in Spain, where he mastered the Spanish guitar repertoire and learned Flamenco guitar with maestros Paco Cortés and Adam del Monte.  He holds a Doctorate in Classical Guitar from USC ‘s renowned Thornton School of Music. 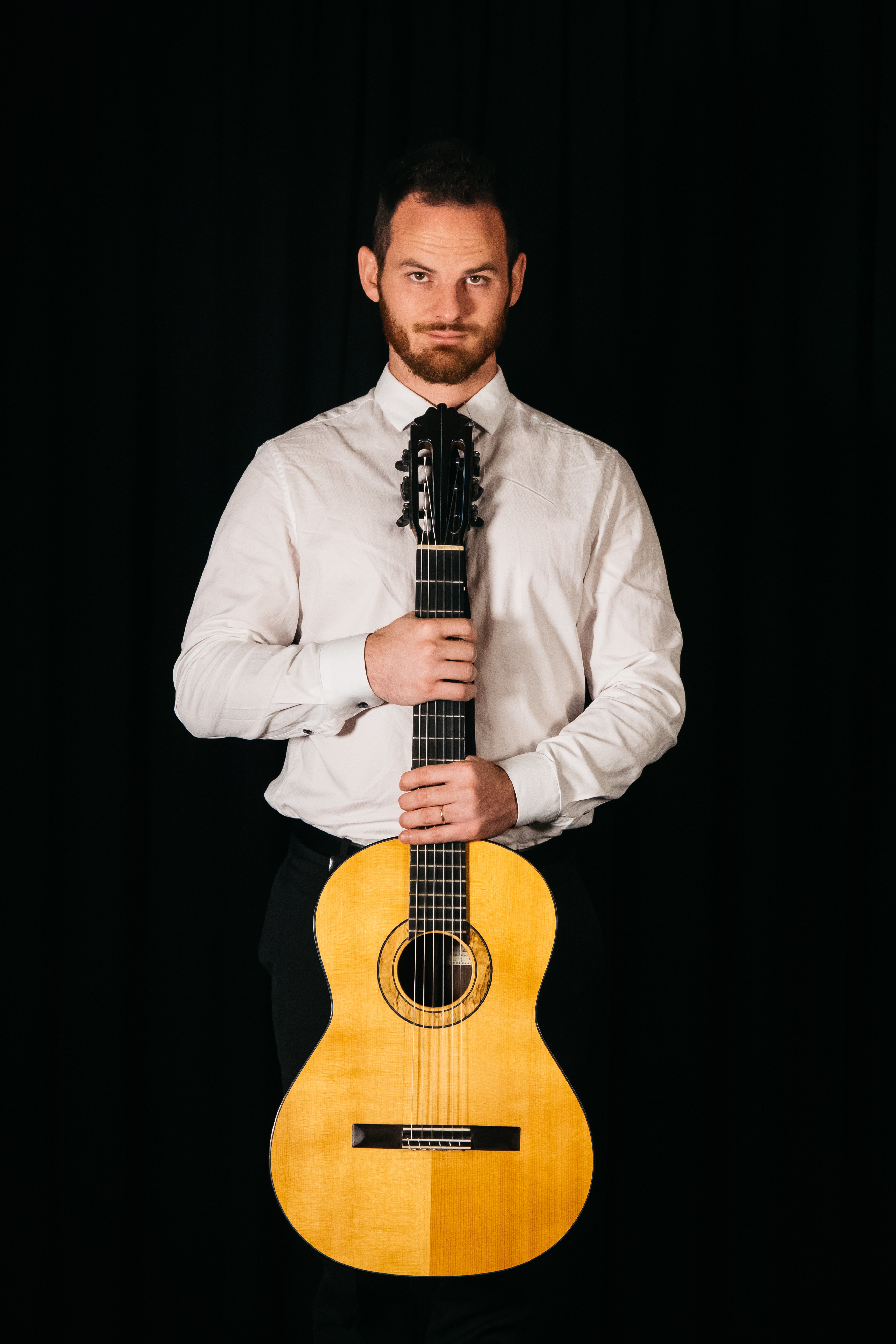 In addition to his work as a solo artist, Jaxon collaborates frequently with ensembles.  He is one half of the duo Jâca (www.jacamusic.com) with clarinetist Wesley Ferreira. The duo has been called “WAY too much fun for Classical music” (Cris Inguanti, Vancouver Symphony Orchestra) and praised for their music that “pushes classical music forward” (CULTURS Magazine).  Jâca actively performs on the concert stage worldwide and also gives masterclasses and lectures at universities around the USA.  Jaxon is also a performer-in-residence for the  Sounding Board Project: a new music initiative for classical guitarists and composers that has launched innovative and compelling projects since 2019.  He also collaborates regularly with soprano and voice educator Laurel Irene (www.laurelirenesings.com) to perform and premiere new music for guitar and voice. 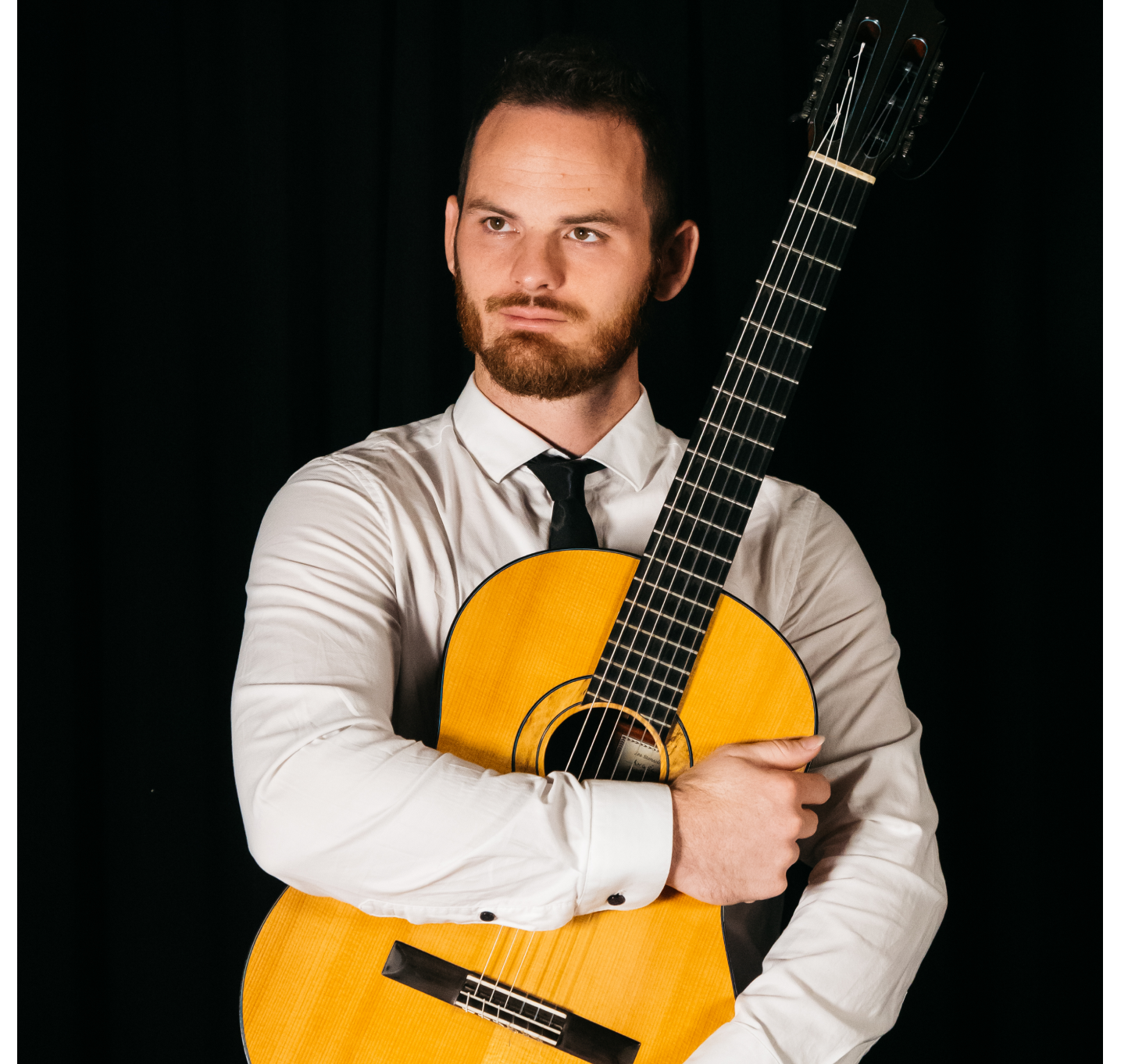 Jaxon Williams is an award-winning internationally renowned performer on the Spanish Guitar. Specializing in Spanish Classical and Flamenco guitar, Jaxon received his Doctorate in music from USC and won a Fulbright Scholarship to master Flamenco guitar in Seville, Spain. Jaxon has won prizes in numerous international guitar competitions and tours internationally as a soloist as well as part of various groups.
‍
Jaxon has been performing at weddings and events for over 20 years and has received top reviews for his exceptional professionalism and rapport with clientele. A well-connected artist in the Los Angeles scene, Jaxon offers many music options for events including: solo classical guitar, solo flamenco guitar, guitar duo or trio, or a full flamenco group complete with singer and dancers. Jaxon uses top notch audio equipment for events.

Jâca is a Los Angeles based duo ensemble that reaches beyond the bounds of classical music. Comprised of clarinetist Wesley Ferreira and guitarist Jaxon Williams, their virtuosic and engaging concerts stimulate emotion, inspire imagination, and promote cultural understanding. Jâca champions innovation, redefining the traditional concert experience through their entertaining and unique stage presence and by inviting audiences to experience the very best of humanity through the communicative and communal power of music. Constantly expanding the repertoire by arranging and creating original works as well as commissioning new ones, Jâca performs music that ventures beyond genre. Think Kronos Quartet meets Victor Borge meets Ted Talk. As one audience member put it, “that was WAY too much fun for a classical music concert”.

see what we’re up to

“That was WAY too much fun for classical music!”

Jaxon & Laurel first met in High School in their hometown in Oregon, but it wasn’t until a chance meeting over a decade later in Los Angeles that they realized they were both musicians!  With a pension for the new and out-of-the box, the duo pushes the boundaries of traditional classical music, performing and premiering new and innovative repertoire regularly around Los Angeles.  They are 2018 winners of the Beverly Hills National Auditions and have performed and recorded works by Dominick Argento, Daniel Nass, Reena Esmail, David Leisner, and more.

Founded by guitarist Bokyung Byun and composer Nicky Sohn, the Sounding Board Project is an initiative to create new, meaningful repertoire for guitar by promoting active collaboration between composers and guitarists.

As a performer-in-residence for both 2019 and 2020, Jaxon helped establish collaborative relationships between composers and guitarists, facilitated workshop training for composers, performed new works in concert, and produced professional quality audio/video recordings of 5+ new works for classical guitar.

The crowning achievement of his time with Sounding Board was direct collaboration commissioning a new work from acclaimed composer Sato Matsui. The work, titled Friction, blends sonorities from Matsui's home country of Japan with Classical and Flamenco guitar textures in a modern language that has been hailed as a "Fascinating, revolutionary, and blisteringly new".

What does a professioal musician do when they clock out for the day?  Make more music!  I have long been interested in other styles besides classical guitar.  In my younger days, I dabbled playing electric guitar in bands.  These days, I stay busy with other styles, from making fingerstyle originals and covers to eccentric improvisations to 80’s-inspired synthwave electronic music, this page is a place where my not-so-serious projects can have a life outside of my iPhone voice memos.  I hope you enjoy them (or at least have a laugh)!